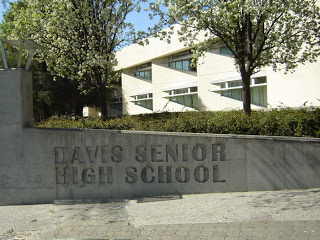 “We are more alike, my friends, than we are unalike.”
― Maya Angelou, The Complete Collected Poems of Maya Angelou
When I first started teaching I worked in a rough neighborhood.  It was completely different from where I grew up-no long, winding bike paths, well manicured little league fields, or bountiful Farmer’s Markets.  There was no nearby college, rich with cultural opportunities, nor any kids hanging out at the public library.  Instead, there was concrete, apartments, iron gates and bars on windows.  There were grassy areas devoid of dogs on leashes or children on swings.  It was different, and I was a bit intimidated.

The 25 mile commute each day from the bubble of a community I grew up in took me from a place where crime wasn’t something we worried about. We hardly ever locked our doors, and if we broke curfew (or any other teenage rule) someone always saw us and informed our parents.  We knew everyone at school, and there was no escaping a reputation that siblings had left behind.  We went to school from kindergarten through graduation among children we played in sandboxes with-some might have called it utopia.  Until one day… 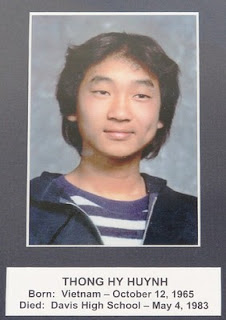 Thong Hy Huynh was a new kid in town.  His family had recently immigrated from Vietnam, hoping for a better life. He was quiet-in fact, so quiet that I never even met him. I never knew his name until the day he was killed on campus.

On that day, life in our idyllic little town changed forever.  One minute we were walking to Home Ec during our senior year, preparing for another period of delightful cooking instruction.  The next minute, total chaos erupted just around the corner from our classroom.  People were screaming and a huge crowd hovered near the art room.  For a moment I thought it must be just another fight-not that fighting was an everyday occurrence.  But the teacher’s grave expressions and composed panic told me this was more-much more.

Thong was different.  He didn’t speak English fluently, and had seen horrors in his native country we can only imagine.  At that moment on May 4, he was defending a friend who was being tormented by a red haired, light skinned bully.  Words were exchanged, and before anyone knew it Thong was down, stabbed and bleeding to death.

Eight years after his death, I remember what I felt when I began teaching in my new community.  I felt different.  I was out of my comfort zone.  I felt scared and insecure.  But after a few weeks, I felt myself relaxing. I felt the love and trust of my students and their parents as they realized my care was genuine, and my passion for teaching began to override my fears of being ‘different’.

I don’t think it was until then, years after Thong died, that I really realized what Maya Angelou was saying.  And now, when my daughter walks past his memorial plaque at the high school I hope she understands.  Actually, I know she understands.  Because what I learned from Thong and my students is a part of me, and the message flows from my heart and actions into my children at home and at school.  We ARE more alike than we know, and being different is what makes life such a beautiful experience.

Educators and Preventing Medicine Abuse
My "Do Something That Makes You Happy Today" List
9/11/20 and the Country Crumbles Around Us, Again