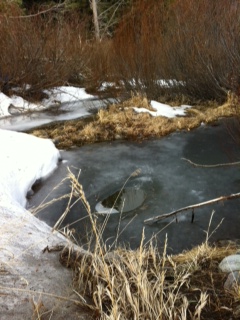 At first it was kind of nice-the weather was clear and cold and the snow making machines were doing their thing day and night.  We could hardly tell the difference.  I enjoyed not having to slog through snowbanks from the car to the cabin.  Hauling luggage and groceries was much easier, and I haven’t even had to take the snow shovel out once.

Then it warmed up.

Suddenly I wasn’t spending my mornings and afternoons on the slopes.  Instead, the lodge became my home for seven hours a day.  Outside the windows I could watch the dirt streaks appear and the rocks uncovered.  Morale was going down on all fronts.

Aside from learning a snow dance, I needed to do something different.  As I set off on a walk in the afternoon, I began to make startling discoveries-there was more to this place than snow.  The simple, stark beauty of winter dormancy took hold of me, and I found myself snapping photo after photo.  This image was taken on the border of the Alpine Meadows Ski Resort, where I spend many days during the winter months.

As I looked at this little frozen creek I realized that the lack of snow wasn’t altogether bad.  I thought about how we often wish for the familiar, the known.  These are the places we feel comfortable and safe – and predictable.

I’m learning that if we look at the flip side, though, we can see some pretty amazing things, and that by turning our perspective around life looks beautiful, just in a different way.

What can you flip over and discover in your life today?

A Year of Change and Possibilities: January, February, March, April 2014
To Look At Life As It Is
Once Upon A Time