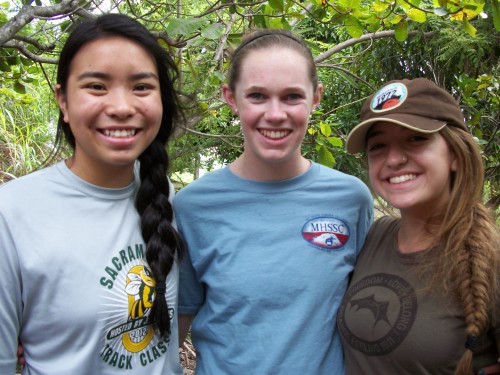 I’m in a bit of culture shock, actually. I’m still thinking in Spanish – which is quite strange for someone who really doesn’t speak the language. In Nicaragua, communication was quite a struggle for me.

Sometimes I’d try to speak, and it would come out an odd mixture of Franglish – a twisted concoction of my college level French, mixed with years of listening to Spanish, and topped off with my native tongue. It scrambled my brain.

My kids say it takes them about 24 hours to reset the language switches in their brains from English to Spanish, and after that, their fluency takes over. Aside from the copious amounts of slang Nicaraguans use, as well as the dropping of the ‘s’, they manage to communicate quite well. They definitely shatter their ‘gringo’ appearance when they open their mouths, much to my delight.

One of the first nights we were in Nicaragua we walked to the nearby internet/phone cafe to make a few calls home. As my three teenage daughters and I entered the small room, we were greeted by a handsome young man behind the counter. I kid you not – he took one look at us, turned slightly to the side, and began slowly taking off his t-shirt to reveal his well-toned upper body. As the four of us stood there dumbfounded, I quickly gathered myself and whispered, “Say something in Spanish – he needs to know you understand him before they start making fun of us!” Quickly, the girls regrouped and asked to use the phone in impeccable Spanish, and he smiled and let them into the booths.

Walking home that night, I thought about my comfort level in Nicaragua. I’m basically at the mercy of my children to communicate for me, which is an interesting place to be. In Nicaragua, I’m much more comfortable being an observer. I can pick up enough of the conversation to act, to do something, to get to the right place, but to truly jump in and get to know what people are thinking, feeling or believing is nearly impossible for me. It keeps me at gringo status. It forces me to trust, to rely on someone else to do my talking.

To have my voice.

For someone who has worked so hard to find her voice and learn how to use it, that’s a little unsettling. My lack of language keeps me on the outside.

One day at the worksite things weren’t going so well for me. In the space of about 30 minutes I had fallen on my butt and dropped a heavy wooden sifter down my leg, leaving a huge, bloody scrape. I was hot, tired, and worried about what accident would happen next. Perfect time for a walk.

I set out down the road with Cameron and Niki, just hoping for a diversion from my looming injury. While I walked off to take a photo, Cameron struck up a conversation with a young man feeding his pigs. Curious, I walked over and started listening. I couldn’t follow much, and Cam kindly started translating about the beautiful cows in his pasture (well fed and bred for plowing the rocky fields) and the hungry pigs, who were being fed the milk left over from something or other. 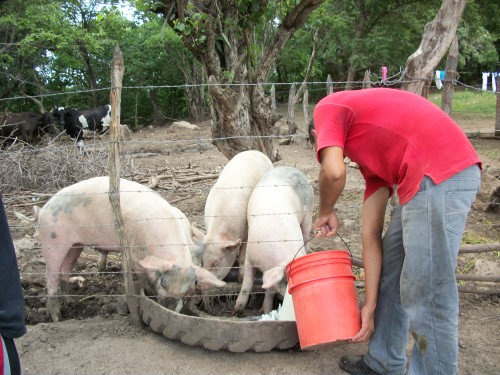 We wandered down a path and caught a glimpse of a distant view. At Cameron’s urging, we started down the steep trail and soon stopped at a beautifully manicured yard, the dirt carefully swept and red hibiscus bushes in bloom. While Niki and I snapped photos, Cameron called out “Hola” to an old man sitting on his porch. With that one word, we were welcomed into his home and given a tour of his beautiful yard. He told us how he had lived there 50 years, and his wife proudly shared the fine construction of their home. 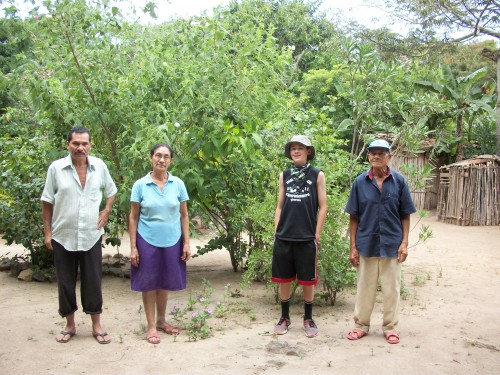 After a few photos, the man told us to keep walking down the path for a view. Just as we were leaving, another young man spoke to Cameron in Spanish and asked us if we had time for a walk, and he would take us somewhere special. Cameron agreed, skipped after him, and Niki and I scrambled to keep up. 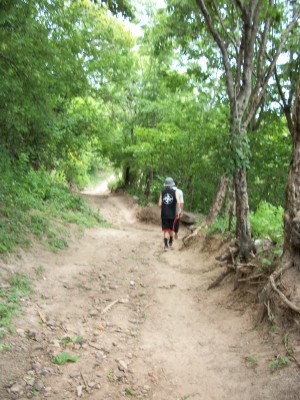 We walked through a community we didn’t even know existed, past well kept homes and smiling Nicaraguans. We were the only ‘gringos’ for miles.

Suddenly, we stopped at the edge of a cliff. The most breathtaking view awaited us, and we were speechless. 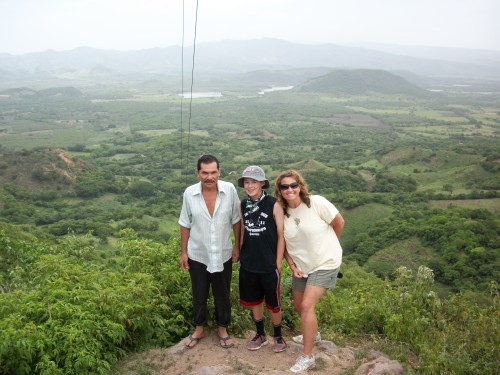 Cameron continued his conversation as we snapped dozens of photos. Our guide pointed across the valley, and said he wanted to take us there. Again, Cameron agreed and we tagged along. 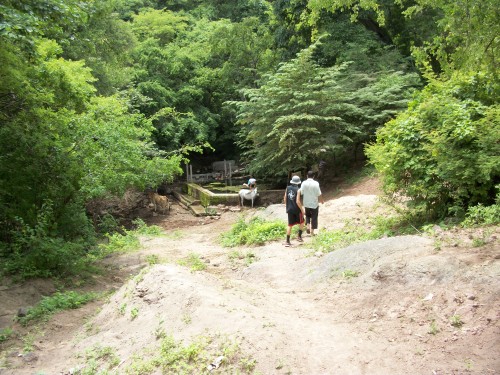 We wound up here, at the private watering hole for the community. We felt incredibly special to have this behind-the-scenes tour. 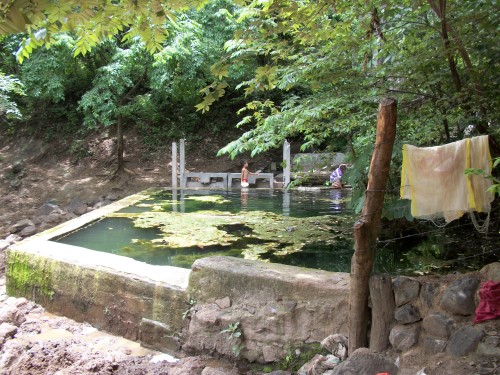 Walking back to the work site, I realized that without Cameron’s fluency we wouldn’t have had that experience. We would have snapped a few photos of the house and maybe, hesitatntly gone down the path a bit more. could I have said hello like Cameron did? Of course, but did I? Of course not. Would I have allowed myself to be led into the community alone, not understanding where I was going? No way.

To think of what I would have missed.

Sure, with my Franglish I can buy a Fanta or a pair of earrings. I can even get the kind of beer I want, and get myself to breakfast on time.

But I cannot ask why I need to drink the Fanta out of a bag. Or why I can’t take the bottle of beer instead of the can, or how Enrique prepared our delicious breakfast meal.

I can just smile and say, “Gracias”.

Language = power. Language opens doors, makes friends, and connects us. Language gives us a voice, enabling us to break down the outside and get to the good stuff – the gooey, sweet inside that makes us who we are. I’m so glad I got a taste of that.