“Beatrice leaned into her daughters,  powerless to halt another round of tears. She thought about all that had happened, all that she had done, the years of deception and betrayal and hurt. And as her daughters held her, their contact comforting and familiar, she thought of them, and of Emma and Morris, all the lives that she had changed. So many lives. And she cried as she thought about Agnes.” ~ from A Life Apart 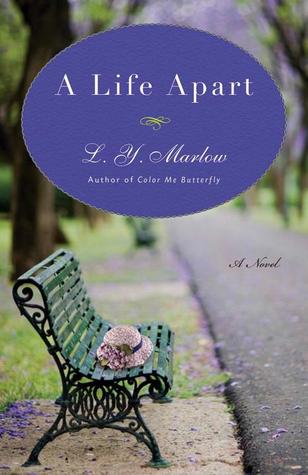 A Life Apart, a new novel by L.Y. Marlow, delves into the themes of race relations, love and family. A Life Apart is set first in World War II, focusing on a young sailor, Morris, and his wife Agnes. The novel is told from multiple points of view, each chapter switching narrators. The story begins in 1941 Hawaii, just prior to the bombing of Pearl Harbor, and concludes in 1970s Boston. During the 30-plus year time span, L. Y. Marlow weaves a complex story of Morris, his wife and daughter, and Beatrice, a woman he meets when he returns home after surviving the bombing of Pearl Harbor. Spanning nearly 50 years, A Life Apart subtly weaves the stories of Beatrice and Morris while breathing life into the often forgotten memories of both white and African-American soldiers in World War II.I was immediately drawn to A Life Apart because of its historical time period. I love learning about history through reading, and when I realized that A Life Apart delves into the race relations of the time period I knew this book would be something unique. Interestingly, what I ended up enjoying most about the story was the character of Beatrice, the young African-American woman Morris meets after the returning to Boston in 1942. Beatrice was a well-developed character; through her I could feel the pain of not only living within the societal confines placed on women in the 1940s, but also could begin to glimpse a life I’ve never experienced – a life where segregation dictated nearly every aspect of life. I admired Beatrice’s strength as she grappled with the pull of her heart against the ties society imposed against her. I respected her strength of character, as well as her ability to stay true to herself. In the end of the book I was intrigued with her ability to go beyond herself and make amends, not because she had to, but because she felt it was the right thing to do.I felt at times that the plot of A Life Apart took some huge leaps; relationships were built a bit too quickly, and especially in the beginning of the book I found myself questioning if this would really happen with the speed and expediency that the author created relationships. I wondered if it would have been so ‘easy’ to give into the pull of the heart, especially knowing how deeply Beatrice was rooted in propriety. Towards the end, however, I began to fall into the rhythm of the story, and found myself eager to uncover each new element of the plot. In the end, I would rate A Life Apart by L.Y. Marlow four out of five stars. For readers looking for an easy-to-read historical fiction novel about World War II and the aftermath with realistic characters, this novel will satisfy.

I received this book from the Blogging for Books program in exchange for this honest review.