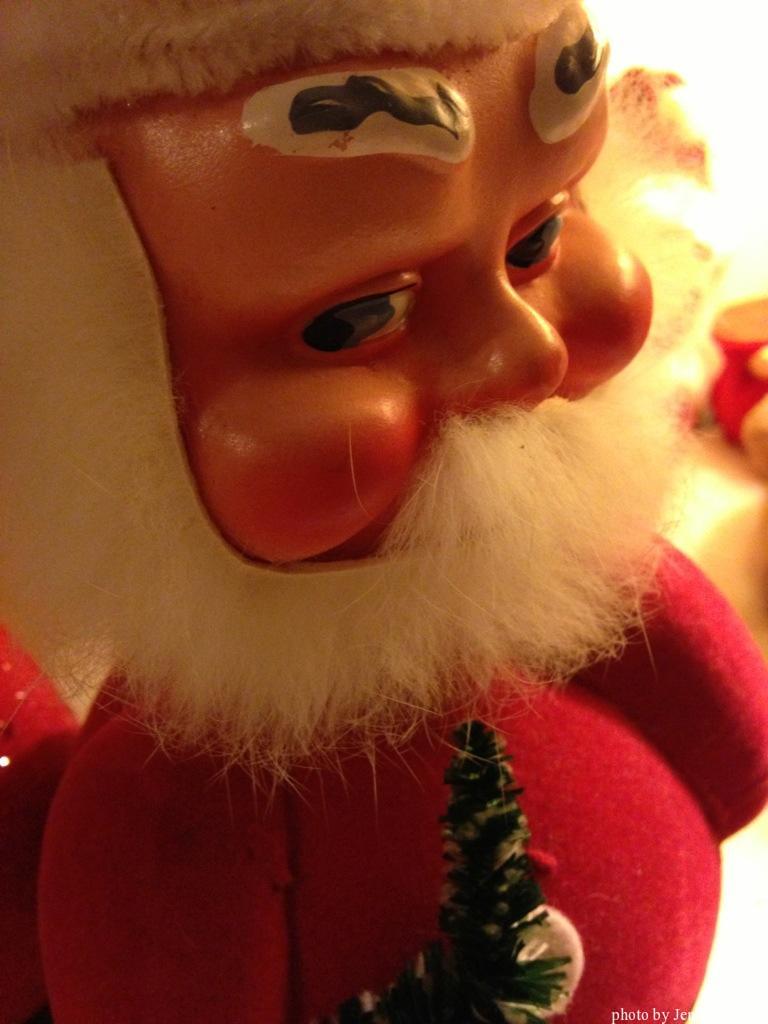 I’m sitting cross legged on the couch, recently rearranged to directly face the six foot high Douglass fir that stands regally in our front window. at this hour of the morning the house is blissfully quiet, the only audible sound being the ticking of the kitchen clock and the occasional hum of the refrigerator to remind me that I’m not entirely stuck inside my mind.

On the low wooden coffee table sitting between me and the tree a candle flickers and casts a subtle shimmer of light against the funky mirrored cone shaped trees, the chess set a scramble of mislaid figures waits nearby for nimble fingers and cunning minds to bring it to life. The fireplace is cold beneath the twinkle of white lights and the four handmade stockings hanging in anticipation of tomorrow night. 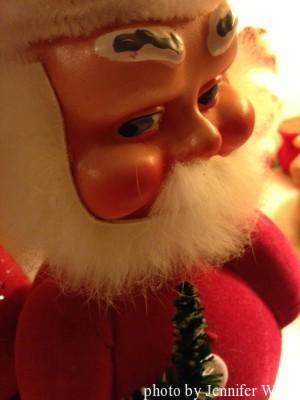 The retro Santa collection graces the table to my right, a mish mash of a collection from grandparents savvy enough to keep Christmas collectibles from their younger days-they make me smile. To my left, the piano top holds ‘the white house’, so named by my husband’s grandmother, a handmade wooden structure complete with a removable chimney for Santa to hover over the top of as he gazes down on original 1940s-style miniature plastic versions of Christmas trees.

In other words, as I sit here in the silence, sipping my coffee with cream and wondering how in the world Christmas Eve can be tomorrow, my house looks festive. Except for one thing: the undecorated tree.

Yes, the hundreds of white lights warmly twinkle on its branches, casting a festive glow out the window to passers by. I even managed to plug in the electric Santa on the front porch in my festive attempt at making everything seem normal this year. But the truth is, it’s a different kind of Christmas around here this year, and frankly, it’s been hard.

In other years, Christmas carries the wave of anticipation and excitement common with most families of young children. Shortly after Thanksgiving we trek to pick out the perfect tree, make an evening of decorating in front of the fire complete with Christmas carols and exclamations of surprise and delight as each little ornament is removed from the box and hung with great contemplation, and sometimes a bit of bickering. Ah, the sounds of Christmas.

And in other years, we even had two trees, so over-the-top did our love for the season go. We simply wanted to have Christmas in every room of our home, hoping to prolong the season the best we could. My early December birthday was always a measure of the countdown; advent calendars would be in full force, lights would be twinkling from both stories of our house, and our son’s mile long Christmas list/letter to Santa would be taped to the fireplace.

But not this year. It’s a different kind of Christmas around here right now.

I’ve been wondering if this is what it will be like when we’re empty-nesters; that hesitancy to take Christmas full tilt when it’s just the two of us with no kids around. I wonder if this is some sort of inspiration for Elvis’s ‘Blue Christmas’ that I purposely have avoided hearing this year. I wonder if this is what so many people experience during the holiday season when they’re remembering Christmases long gone, children grown and on their own, creating their new memories in new places with new people. I just never figured it would be happening this year.

And every time I’ve walked through the door this month, I’ve plugged in the lights and sighed. I just can’t do it. The boxes of ornaments are still stacked in the dining room, unopened. And it’s December 23. This has never happened before. And I can’t blame it on holiday business, too many parties or anything else-except for one thing.

On Saturday night, after I had picked him up from his dorm, brought him back to the cabin, fed him until his belly cried for mercy and my eyes drooped from fatigue, he curled up on the couch and asked me for some paper. For the next hour, he quietly wrote, erased and drew while I prepared for the next morning’s early ski race departure. I noticed him tuck his paper in his backpack, and asked what he had been doing.

“Writing my Christmas list, ” he replied, his fourteen-year-old face tipped up to smile at me.

“Can I take a look?” I asked, knowing that there was no time left for shopping, and hoping that at least I had gotten that part right this year.

“Nope,” he smiled back, zipping up his backpack. “I just can’t wait for Christmas.”

“Really?” I mused. I secretly hoped that the decorations at home would be enough, and wishing I had at least wrapped a few presents to stick under the tree.

“Yeah, I can’t wait. I love sitting by the fire, you and Grandma drinking your coffee, Lily grumpy that I woke her up too early, and finding my stocking. And Dad-yeah, he’s just sitting there, but it’s great having everyone home.”

And then it hit me. I felt an unexplained release of bottled up anxiety, fear, sadness, and worry shiver down my neck, and suddenly I felt better. He was right. It is great having everyone home. It will be great to have everyone home, even for a few days.

This year, it’s a different kind of Christmas. But it will be just fine. Perhaps, even festive.

Snow and Sickness and Those Horrible Mommy Moments of Panic
"Mommy, please read me a story"
I'll Take Easy Over Difficult, Please