“Well, at least now I know not to floor it going into the driveway while cutting off people and scraping the front of the car on the curb,” my 15 year old daughter reflected after putting the car into park.

We all know that this day is coming.  Parents are always marking off the milestones with our children-first tooth, first steps, first words, first day of school, first loose tooth, first ….driving lesson?

I decided to handle this milestone by putting the responsibility with my daughter.  If she wanted to drive, she needed to be mature and responsible enough to make it happen.  She would be obligated to research the online driver’s training course, sign up and complete the requirements.  All I needed to do was provide the credit card number.

Then it was time to take the written test.  Again, the ball was in her court.  She must research the hours of the DMV, figure out how to set up an appointment, make the appointment, study for the test and then show up and take it.  All I needed to do was drive her there. 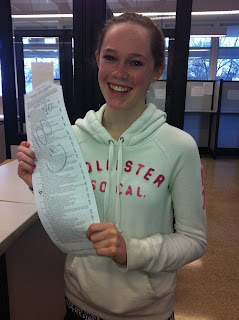 Turns out the written test wasn’t as easy as she thought.  She needed to figure out a different way to study and approach the test.  All I needed to do was buy the DMV app from iTunes.  That would buy me a few more weeks.

Again, she had to do the set up.  Some might call this denial on my part – I call it strategy.  Each step she accomplished on her own showed me that she was mature enough to handle driving, and allowed me a bit of time to get used to the idea. 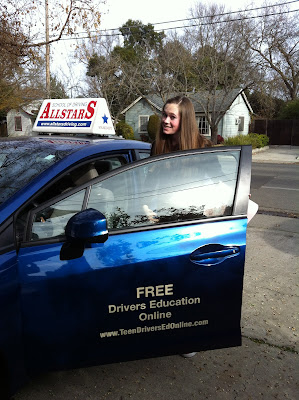 When the day came for her first lesson I trembled with nervousness like she was going on her first date.  Her white haired instructor, Luther, pulled up and quickly took her to his car.  This milestone wasn’t as satisfying as her first word or her first steps.  This one stung a little.

After what seemed like hours sitting in the driveway behind the wheel, she slowly backed out and drove off.  My baby-behind the wheel of a bright blue Honda.

Two hours later she returned.  No bumps or bruises or tear stains on her face.  Her coy smile told me everything went ok, and Luther confirmed it.  “A bit fast on the turns” was his only comment, aside from telling me that she now NEEDED TO DRIVE EVERY TIME WE GOT IN THE CAR!

What?  Did I hear him correctly?  Every time?  There must be some other way…some type of driving simulator? My little red Prius doesn’t have a driver’s side set of brakes-how will I survive?

Like her first steps, her first words and the first day of school, I survived.  The fear of the unknown haunts me as a parent.  I knew what life was like when she could only crawl, would make baby signs for things she needed, or was only in preschool part of the day.  I could never imagine how it could be any better than that moment, or how any age could me more special.  But somehow, it was, and so is she. 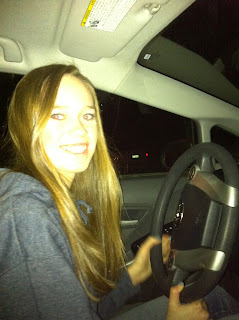 I hope she is learning how much I believe in her.  I know she can do anything she sets her mind to.

mamawolfe spends her days teaching and parenting, and her nights writing about it.
Visit her blog mamawolfe for more life lessons and opinions on the world today

What Martin Luther King Jr. Means To Me
iPhones and Feeling Old
Education Reform: Three Ideas for the Next Four Years