Her name was Martha.  Not sure exactly why or how she earned that name, but it kind of stuck.  I got her when I was 17 – my senior year. My mom actually found her for sale, and I guess she thought her daughter needed a crazy convertible before she went off to college-I don’t remember the exact details, but I do recall driving to a house on

where an older man (he was probably about 50-ha!) was trying to sell her.  He had been towing her behind his RV when he traveled, but her time had come.  She was young and ready for adventure, and she needed someone who could keep up with her. 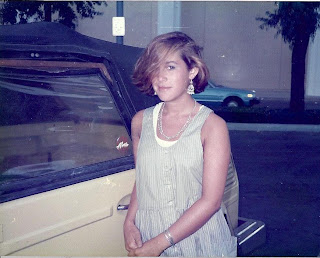 As I drove off in her the first time, black vinyl top folded back, I thought I had really made it.  Here I was, a young northern girl with my own convertible!  Forget the fact that her removable windows were made of plastic vinyl, the propane heater wouldn’t work, the radio only played AM, and the metal on the floorboard was the only thing keeping road debris from bouncing into the car-she was mine.  All 1972 top of the line VW Thing.  Bumblebee yellow, black vinyl, chrome bumpers made of steel – she and I were a force to be reckoned with.
There was another girl – Randy was her name.  She moved into town that year.   Not only was she super cool, but she had a yellow Thing too!  We soon became bestfriends-it seemed like fate had brought us together.  Double trouble, long haired, fun loving, boy crazy TAB swigging B-52 Violent Femmes bopping around in matching convertibles.  Only in , right?
Times change, and Martha and I headed off to college at the end of the summer, leaving our partner in crime to fend for herself in the hometown. Suited up with Alva sticker and surfboard ready,and with the coast now under an hour’s drive away, Martha became the beach mobile.  The removable plug in her floorboard was handy for washing out sand and debris after our escapades.  I soon learned that cruising over the hill to Santa Cruz and back required vigilance with the gas tank-more than once I found myself stranded by the side of the road with nothing to do but wait for help to find me.  Big band and talk radio became my best companions on those foggy morning drives.

Then one day, Randy arrived on campus.  Our funny vintage clothes and crazy colored matching cars were like nothing these college kids had ever seen before.  In a parking lot full of expensive foreign cars, this new girl stuck out.  The first night the boy’s dorm slipped out and removed our driver’s side doors – yes, they detached at the hinges – and choked with laughter as we struggled in the morning to get our keys to fit in the locks.  I hate bullies.
The next summer Martha, Randy, her Thing and I decided we would live in .  To us, young, energetic and ambitious, it seemed like a good idea at the time.  We loaded up our clothes, hung an ironing board out the window and headed south on I-5 towards our promised land.  Two girls, two convertibles – what could be more ideal?  The stares we received were legendary – probably in part due to the premade signs we had that we would flash to each other like signal beacons.  A few passers by flashed us back a few things, too. Traveling to Rosarita Beach, Mexicowas one of Martha’s favorite adventures.  Roomy enough to stretch out, she became our kitchen, dressing area and hotel room.  I think we really pushed her to her limits there-she was glad we all made it out alive.
There were a few downsides with Martha.  She was freezing cold in the winter-driving over the Grapevine in December wrapped in a sleeping bag was not my ideal start to Christmas vacation.  She was noisy-the wind whistled through the removable windows making it nearly impossible to sing over the racket.  And she was brittle.  Like any lady, she aged gracefully but began to show wear and tear in her plastic top and windows.
Martha survived a few fender benders-the steel helped a bit.  My little brother’s head was hard enough to crack her windshield, but her strong bumpers never bent.  The last straw came one windy, rainy afternoon when, while driving down the freeway with my future husband, Martha’s back windshield imploded sending shards of rock hard plastic flying into the back of our heads.  Boyfriend, who never succumbed to Martha’s charms, began a ‘get rid of that damn car’ campaign.
Stupidly I agreed, and Martha went to live with my uncle and his 16-year-old son.  She was definitely showing her age – years of hard living will do that to a girl.  With a new engine transplant, though, Martha was able to embark on many happy adventures with him for years. She tried to live up to her reputation – beach trips, screaming up and down the SF hills hoping the mediocre brakes would hold, hauling band equipment, and roaring down I-5 to San Diego with her new man.  Kind of like a mid-life crisis, I guess you could say.  Life was good for Martha for a few more years.

Sadly, Martha moved on to yet another fellow.  I’ve heard he’s a real nice guy and treats her well.  They live somewhere in the Bay Area.  Rumor has it she’s had a total makeover-sure to breathe new life into the old gal.  It happens to the best of us.
I wonder what he calls her.

The Pull of Nicaragua
Uncovered Beauty
Sixteen Years Old, and She Is Girl Power