Technology can be a beautiful thing.  We feel instantly connected, safe and well informed just by carrying a little 4-inch contraption in our pockets.  It keeps us up to date on breaking news, lets us know when we’re late for an appointment, and can transport us across continents in a matter of seconds.  Parents monitor their children, spouses know what’s for dinner, and employees can let employers know when they’re running late. 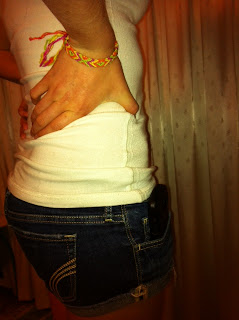 Then there’s the ugly part.
As much as we teach our kids to be safe on the internet, don’t give out personal information and make sure to let us know exactly where they are, there’s one ugly thing about technology: a lack of manners.
At my middle school, we do not allow cell phones to be out during the day.  That means from when kids step onto campus until they leave at the end of the day, phones are not to be seen or heard.  For the most part, kids respect the policy.  There are no ear buds hanging down their bodies, and it is rare for me to see a phone out in class.  However, I spent the morning in a high school today, and I was shocked at what I saw.
Phones were everywhere.  They were crammed in tiny jean short front pockets, stuffed in back pockets, slipped in and out of backpacks and sometimes blatantly hanging out on the desk.  And not the free-with-a-new-line type of phones – I’m talking smart phones.  Kids all around me were seemingly more engaged in what was happening on their touch screen than what the teacher was presenting.  There were varying degrees of compliance-some actually broke away from their texting to participate in the activity-but then just as quickly went back to checking Facebook or listening to music.
I love my smart phone just like anyone else, but what I saw today disturbed me on many levels.  I saw the pack mentality at work.  If one kid is allowed, the rest follow.  If one teacher doesn’t mind, the rest fight an uphill battle.  But what might have bothered me the most is the complete lack of respect for what the teacher was trying to do in the classroom; as engaging as he was, he couldn’t compete with the little electronic box cradled in their hands.
I’ve been teaching in the technology generation most of my career.  At first, I noticed my student’s desire for instant gratification that video games bred.  Then came the demand for a teacher to be an entertainer.  Now it seems that our society is allowing citizens to forget their manners and validate a lack of common courtesy.
Come on, people.  This is turning ugly.  Technology can be a beautiful thing, but let’s use it politely.  Teach our children well.