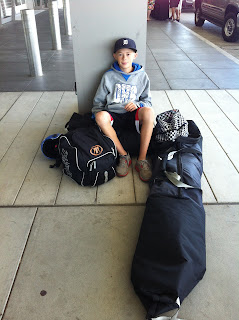 I got a text message last night from my son.  That in itself isn’t unusual – he’s pretty good about checking in on a regular basis.  He’s been away at camp for a week, and he fills me in on what he’s doing, what the weather is like, the quality of the food, and how he can’t wait to come home and play baseball, and that he misses me.

What was unusual about last night’s text is that out of the blue, he asked to join Facebook.  It took me by surprise – he hasn’t indicated much interest in the past, and in fact, when I asked him in the spring if he had any friends who had it, he said no.

I guess he’s made some new friends at camp.

I immediately texted my daughter – being the 16-year-old social network expert that she is – and asked her to remind me how old she was when she “got” Facebook.  7th grade.  That didn’t give me much ammunition against his foray into the networking world.  Where can I find online reputation management for 13-year-olds?

The texting from my son continued with clever attempts to sway me with promises of all the fun we’d have once he was online, and how we’d be more connected, too.

Hit me where it hurts, kid.  What mom doesn’t want to be more connected to their teenager?

And after all, he pleaded, he’s the only family member who cannot get “tagged” in photos or “checked-in” whenever we visit some exciting locale.

It’s not that I wasn’t expecting this – I actually am surprised it took him so long to ask.

I told him to ask his dad, who apparently was obliviously sitting beside him in the van while he was chatting with me, unaware of the uncharted waters we were about to dive into.

Ingeniously, my boy responded that it only matters what I say, and that I’ll see everything he’ll be doing.  It’ll be fun, he urged, knowing that I was close to the breaking point.

And with those two little letters, our conversation ceased with a “Goodnight, mom. I love you.”

That’s it.  He’s passed through the innocence of childhood and entered that frightening arena that all parents dread.

Give me puberty any day – I’m much more prepared to discuss issues of young love than deliver the woes of social media.

Can’t wait for all that fun.