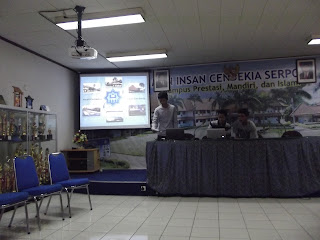 After yesterday’s ehausting adventures, we were happy to
have a late start.  Indonesian children
attend school on Saturday, so we were able to meet with Cendekia’s leadership
students for an informal question and answer session.  It was neat to see them out of their uniforms;
we were particularly taken with a girl in a beautiful pink veil who was eager
to get to know us. 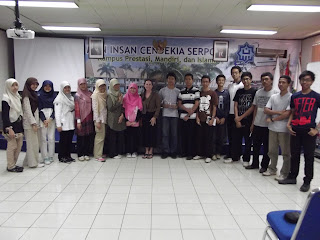 Our discussion proved extremely informative.  The eight girls and nine boys provided
answers to many of our lingering questions:
·         *Grade A National Exams are a big deal.  They determine placement into universities,
and 96% of these students will attend college in Indonesia and 4% abroad.
·        * They are proud of their achievements in the
Science Olympiads, and will send a student to Italy for September’s competitiion.
·         *Their slogan is ‘Unity in Diversity’
·        *They enjoy their weekend events-that’s when they
have elective classes, competitions, and even a type of ‘prom’, although no
dating is allowed.
·         *They put on their own verion of ‘Gakic’, or
Olympics, with competitions in basketball, chess, softball, soccer, table
tennis, badminton and sprints.
·         *They feel the biggest problems in Indonesia are
traffic, pollution, money for education, and corruption in government.
·         *The girls feel that the boys get special
treatment; for example, they are allowed to stay outside two hours later than
the girls.
·         *All students want to go to college, and all said
their parents attended college.
·         *They don’t like the US involvement in
Afghanistan, feeling that the war is an attack against Muslim brotherhood.
·        * They don’t feel like they have much choice.
·         *At school, they’d like to change the food, their
limited access to technolgy, and the ban on cell phones.

After a rest at the hotel, and a yummy lunch out, we began the
journey to our host’s house for ‘break-fast’.
The 20 mile trip took an exhausting two hours, battling road constuction
and traffic. 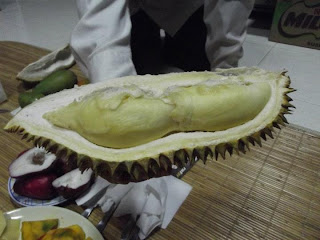 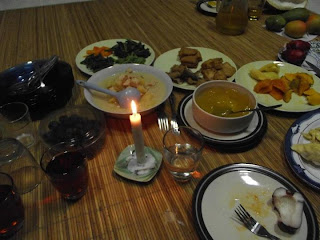 We enjoyed what Yuna called ‘common
food’-several types of mango, Durian fruit, dates, green beans, potato coconut
chili chowder, rice and fried tofu and tempeh.
I’m surprised at actually how little they eat after fasting all day; we
keep expecting them to gorge themselves. 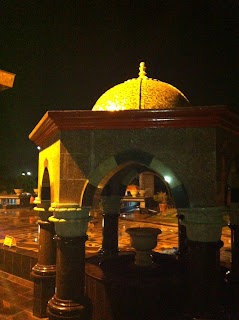 After a tour of her home, we visited the
‘Golden Mosque’ just a few miles away from her house.  Built seven years ago, Yuna described it
as ‘just appearing one day’, which seems
unlikely due to the grandness of the buildings.

We toured the women’s section as they were praying,a nd saw the turrets
made of gold.  Adjacent to the mosque sat
a large meeting house and a mansion the likes of which I hadn’t seen in Indonsia.  Yuna ‘used our name’ to talk to the security
guards and found out it was built by a Middle Eastern woman as a gift to the
country, but she lives abroad.
We expected a shorter ride home, but again
spent two hours traveling back to the hotel.
Although interesting to see Indonesian night life – I’ve never seen a
more crowded McDonalds-we were eager to get home and pack for the next day’s
departure.
The importance of relgion in Indonesia’s culture
and education system continues to fascinate me.
It’s sharp contrast to our laws separating church and state make it
difficult for me to comprehend.  I often
find myself wondering what it would be like if students weren’t blatantly
separated and identified by religion, and if it causes discord amongst the
population.  At our hotel it seems like
the locals are either Christian of Buddhist-we see very few veiled women
walking around the mall or working in the hotel itself.  There is such a serene beauty in the calls to
prayer, and the unison with which they gather together in the mosques.  I wonder if that unity excludes diversity, or
as the students say, they are able to overcome it.  I think there are more veils in Indonesia
than just those worn by Muslim women, actually.