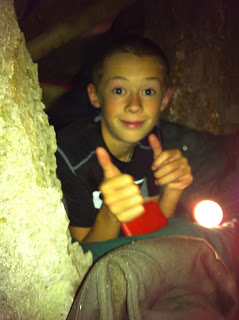 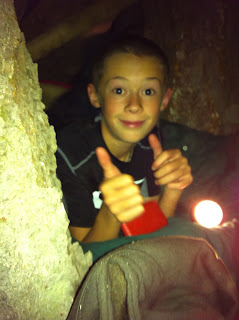 My son is one of those kids who goes fast and furious.  He always has.  He rarely backs down from situations that many kids wouldn’t dream of trying, and usually comes out unscathed.  Maybe we can simply attribute his landing on his feet to good balance, or a dash of common sense – I’m not sure.  This kid has no fear on zip lines over a jungle, flies down a ski racecourse at 60+ mph, and dives off piers into icy cold water.  You’d think nothing would rattle my nerves anymore.

I have to say that I’ve gotten used to his sense of reckless abandon, but never quite used to the fluttering in my gut every time he does something that makes me wrack my brain to figure out where he gets his courage.  It couldn’t possibly be from me.

I was pleased that he spent several hours outside today with a buddy- no daring feats of athletic prowess, just good, old fashioned fun in the dirt.  I couldn’t tell exactly what they were doing, but they seemed busy and happy, and since no loud noises were alarming me through the window, I thought it was harmless.

Then he came rushing in to ask if he could use a tarp he found under the deck.

It should have sent my radar up when he so quickly agreed to put everything back the way he found it.  Wood, bricks, branches gathered from all around the house transformed into a two-boy shelter.  Three hours later they came up for air, bursting through the door covered in dust and sweat, grins as wide as could be.

I remembered those days of ‘Mom, look at me’ as I climbed down the deck stairs and into the backyard. Architecturally sound, they had created the ultimate above ground ‘boy-cave’, complete with a booby trap pit that I immediately tumbled into, spawning giggles all around.  Pride shone on their faces as they described the elaborate construction and their plans for sleeping outside.

That’s when my fear broke through.  Creating the fort was one thing.  Sleeping outside–not so sure.  We’re in bear and coyote country, it is cold, dark, and full of
mosquitoes…the reasons why this was a really bad flitted around my head. My protective instincts immediately said ‘no’, but out of my mouth came, “Let’s ask your dad.” What a wimp I am.

I guess I hoped that a little bit of time would wear the novelty off of their plan, but I was wrong. After dinner, nearly dark, he started in again.  Without much objection from his dad, we relented and they whooped with joy.  Although they were ready to fearlessly dive in without preparation, we bargained with them to at least put down some towels, grab a sleeping bag, and douse their faces with bug repellent.  We insisted on pie tins and wooden spoons for bear protection, and with great ceremony, and a little trickle of teardrops on my part, tucked them in for the night.

I haven’t had many nights spent waiting up for my kids to come home yet; I naively thought it would involve broken curfews and riding in cars with boys.  Tonight, though, I got a taste of it.  Too nervous to sleep, I waited in the silence, sure they would come to their senses and creep back inside.

They didn’t.  No noise whatsoever emanated from their little lean-to, no bears appeared and not a coyote howl broke the quiet.  Everything was silent.

Until about 1:45.  I heard steps on the deck, some shuffling, and shot out of bed to the window.

There they were, barefoot and filthy, looking exhausted, but with all body parts intact.  “We were uncomfortable – and hot,” he mumbled.  I hustled them into the house, and
they clomped upstairs to bed.

I didn’t need to ask questions, didn’t need to say, “I told you so”, because in reality, they told me.  As I settled back into bed, a strange feeling came over me – peacefulness, for sure, that they were safe and sound in the next room.  But also a disappointment in myself for not trusting that everything would be ok.  A frustration that I couldn’t just let them revel in their bravery.  A gratitude that through them, I learned a lesson about trust, and courage, and fear.

Maybe I do have a little of his courage after all.

Taking Time To Relax Along The Road Trip of Life
Happy 17
Cusp of Change: Those We Love Most