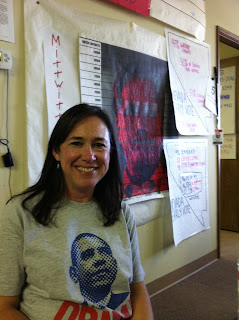 I’d been getting the emails for several weeks.  Each time I opened and read the plea for volunteers to come to Nevada, to work on the campaign, I felt a twinge of guilt.  It was so easy to ignore them, delete and they were gone.  It didn’t take much.  But they kept coming.  And I kept considering, and deleting.

Until I got a phone call from a friend that changed everything.  I couldn’t resist-she had it all set up, I was free, and it wouldn’t take much for me to step up and walk the talk.  I considered, and instead of deleting, I accepted.

I’ve never worked much on a political campaign. I’ve made some phone calls, sported bumper stickers on our cars, made our monetary donations, worked phone banks and made sure I was educated on the issues.  Politics is commonplace in our family conversations, but actually participating face-to-face with other like-minded people is new territory.  I felt a mixture of excitement and nervousness as I packed the car and drove through the dark to Reno.

I woke up the next morning twittering with excitement.  Breakfast couldn’t go fast enough; the family couldn’t get ready as quickly as I wanted.  I couldn’t wait to see what it was all about, especially with my children by my side.   As the rally began, chants of “Si Se Puede” rang out above the thunderous clapping of the Unite HERE group of volunteers.  The energy built to a crescendo, then the details of why we were there and what we needed to accomplish began.  There was a palpable sense of purpose in the air; a definite sense of duty to take action and teach my children firsthand what a presidential election is all about.

Armed with our ‘universe’ of names and addresses and a few hundred door hangers, we headed out to the streets of Reno to knock on doors and urge people to get out to vote.  Our nervousness edged away, replaced by a sense of duty and service.  As my son and I walked together we talked about his opinions on the election, and who he would vote for, and why.  With each step, each contact, and each door hanger left, we came closer to our goal of taking action and walking the talk.

Our lunch break provided another opportunity to open up our world.  Eating side by side with union workers from all over California allowed us a peek into a community we know little about.  To learn these workers had spent the last two months away from their families in order to work on the campaign humbled me.  To hear my son conversing in Spanish with Rosa, a Disneyland banquet server, made me swell with pride.

Our day was long, yet satisfying.  Overall, we made nearly 125 contacts as we methodically walked our territory.  Together, we moved through gated communities, apartment complexes, and converted motels to spread our message of democracy.  We met people of all political persuasions.  We  felt the importance of each and every vote, and heard the power of the people when united for a common cause.

But most importantly, I sensed the lessons my children were absorbing through the sights, sounds, and people they met along the way.  I felt no more guilt.  I could no longer ignore it – I needed to take action.  To walk my talk.  To show my children what true citizenship really is.  It didn’t take much.  Consider it.  Get out and vote.  Show your children what you believe.

What have you been wanting to do? What would you need in order to take action?