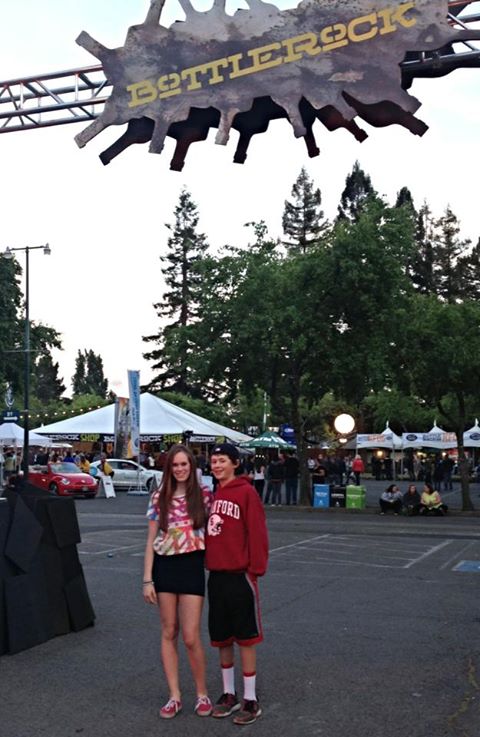 It was one of those surprise decisions, really. A ski mama friend, knowing I love Macklemore, looking for another mom adventurous enough to hang out at a music festival on a school night with our teenagers, called me. Of course, I was game-on. Not only could I see Macklemore live, but I’d get the Coolest-Mom-of-the-Year Award when I surprised my teenage son and daughter with the tickets. Win-win, I’d say – so I took my kids to Macklemore.

As so many well laid plans do, they became a bit complicated due to unexpected pole vault meets and a bit more driving than I thought, but finally we arrived in Napa for the Bottlerock Festival – the first night of what is widely hoped to be an annual three day music event. We had the timing down perfectly, and when the shuttle bus dropped us off in downtown Napa the kids were like racehorses at the starting gate, hardly pausing to take the customary photo for the Instagram post. They were going to see Macklemore, and they couldn’t wait.

Being teens, the first thing they wanted, naturally, was food. Scanning the myriad of food trucks, we settled on two adjacent to each other and placed our order. Rookie move, mom. As the clock ticked down, the opening song thumped loudly throughout the fairgrounds and there he was-Macklemore in full glory. Food or Macklemore? I saw it in their eyes as they grabbed each other’s hands and sprinted to the stage area, leaving me alone with the food truck.

I started to wonder if I’d ever see them again, actually. Arms loaded with hot cheeseburgers and chicken sandwiches, I headed towards the stage, innocently believing their growling stomachs would find me . I was wrong. As I stood there, scanning the dark throng of tweens, teens, moms, and college kids, wafts of fragrant smoke filled the air, I realized they were nowhere to be found. I was standing there like a soccer mom with an armload of snacks and no children in sight, feeling just a bit foolish. After multiple unanswered texts (not easy to do with arms full of food), I shoved the uneaten dinners in my mom-purse (moms always have purses the size of shopping bags, right?), grabbed my ski mama bestie and threw my hands in the air. Macklemore was on stage, and the crowd was wrapped around his finger.

The collective energy of the young people, singing along with him about love and peace and equality and harmony, made me smile. I wasn’t worried that my teens were somewhere out there, lost in the throbbing mass of humanity. I watched Macklemore crowd surf, trusting that his people would hold him up, not let him fall, and realized that that’s really what was going on for them. It’s no wonder people love Macklemore; he’s really a voice for his generation, and more.It’s not about flash or fancy cars or lavish parties, or any of the stereotypical hip-hop images that might come to mind when you hear his music. Macklemore is something different. He is what our teens are looking for- a message of hope. Of acceptance. Of feeling loved for just being who you are, not who someone wants you to be.

When the final song ended, the lights came on and the dust settled, my teens emerged from the masses with huge grins on their faces and stories to tell. Yes, they saw some scuffles and overindulgence, but to me, that’s part of the deal. Life isn’t perfectly behaved, and it takes all kinds of experiences to learn how to navigate through it. But life was certainly in that fairground that night. Macklemore was singing about it. My kids were hearing it. We all were believing it, and hoping that we can make it come true. They survived. They knew how to handle themselves. They didn’t walk away talking about how they were going to start drinking or smoking or fighting-quite the opposite, in fact.

It was definitely a win-win, I’d say.

Taking Time To Relax Along The Road Trip of Life
Prepare To Take The Helm: Building Community Together
My Best Life, April 2014: Endings and Beginnings