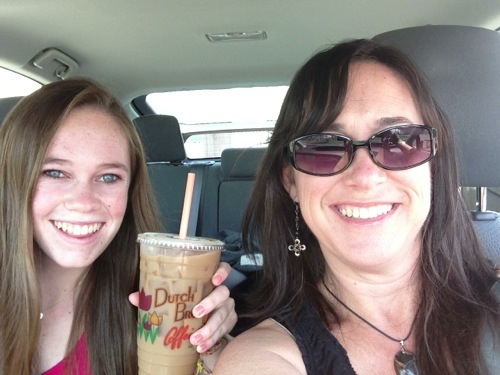 I know many people look towards their child’s college years with a frightening mix of sheer terror and nervousness that as parents, we might not have done everything we can to prepare them to fly out of our nest into the world. I’m right with you. This summer I could no longer put off the inevitable, and decided to face that which scares me: the college tour. A week prior to our departure we quickly went online and scheduled campus tours, admissions meetings, interviews, and appointments to meet track coaches at six universities in Oregon and Washington.

With a tight schedule, a few hotel reservations and a love of adventure, we set off for our first stop: Ashland, Oregon.

We certainly saw some majestic scenery along the way!

It was refreshing to see Shasta without being in the middle of a snowstorm….

One of the goals of this trip was to see not only the university campuses, but to also get a feel for what the communities are like: location, location, location. Ashland’s Lithia Park is a mile off campus, and looks like a great place to hang out.

Ashland, Oregon is known for its Shakespeare Festival, but for me, the dozens of restaurants, coffee shops, and cute boutiques like Paddington Station would be reason enough to live here!

Our first official campus visit was to Southern Oregon University in Ashland, Oregon. It’s a public school of about 6,000 students.

We even stopped by on the way home to check out the track – wouldn’t you love working out if you had this view?

Willamette is a small private liberal arts college located in the capitol city of Oregon. The campus houses about 2,000 students.

They have a grove of trees on campus that is supposed to form a star shape in the sky…I can almost see it.

The capitol is right across the street – great for internships.

A river runs right through the small campus – it covers approximately one square block.

I started thinking maybe one criteria she should use is how beautiful the flowers are on each campus.

She was a bit nervous in her admissions interview…and then had a good meeting with the track coach.

Next stop: Portland, Oregon for Lewis and Clark University. We were a bit intimidated by the formality of the admissions building!

Lewis and Clark is another small, liberal arts college. She wanted to visit Lewis and  Clark due to the proximity to one of her favorite places: Mt. Hood.

I’m not sure she could really concentrate with this view every day – of course, it rains a lot there…

This campus was hilly and green; the tour guide says it is on park land. It felt like we were in the redwoods.

I learned on this trip that smart phones are a critical part of a teenager’s social life…so I bought her a lemonade and made her teach me how to Snapchat. I don’t really see the appeal – I found it frustrating to learn!

The next morning we drove up to Tacoma, Washington to see the University of Puget Sound.

Like many of the schools we visited, UPS is located in the middle of a residential neighborhood. It’s slightly bigger than the Oregon liberal arts colleges we visited – around 2,900 students.

The campus was beautiful and green…they say it mists here-not hard rain. It reminded us a lot of Stanford, just a smaller scale. 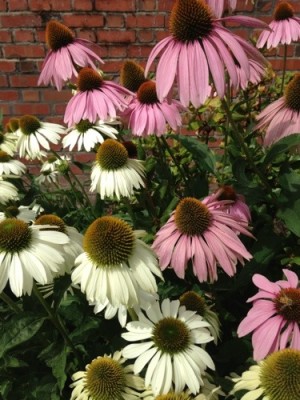 Their flowers were gorgeous, too!

By the time she interviewed, here, she was a pro. She loved the campus, the people, and the track program. Pole vaulting in the rain will take some getting used to!

A fast exit from UPS put us on the road to Bellingham, Washington – very close to the Canadian border. Lots of miles, but we’re still smiling!

Western Washington is a public university with approximately 15,000 students. The campus is nestled right next to a forest. It rained.

It actually never stopped raining the whole time we were in Bellingham…in August. Noted.

Our next road trip day was the one we were sort of dreading – over 500 miles to drive before 1:00 to make it to the University of Oregon in Eugene. 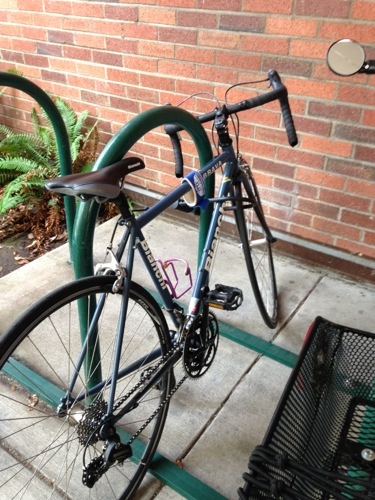 In case you’re wondering, we smiled when we saw this bike because it had a ski strap attached to the frame…made her feel right at home.

What else can I say about U of O? Everyone was nice and friendly here!

The flowers were pretty, too. Oh – and they have a pretty nice track.

I have to say that after our 1,800 mile college tour, not only was I glad to be home, but also we both felt a little less terrified about the college experience. I think she’s actually ready to fill out some applications, and even write the essays. She’s got a lot to consider: location, weather, food, community, flowers, ski teams, track teams, family, mascot, school colors…and cute tour guides. That’s what matters when choosing a college, right?