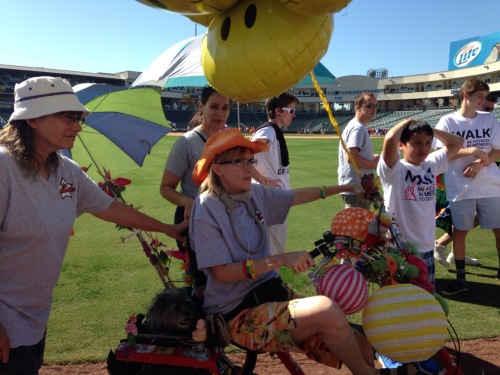 Do you remember the Ice Bucket Challenge?

Last summer, millions and millions of people jumped at the chance to dump ice chests, buckets and barrels of ice cold water on themselves, and then challenge their friends to do the same. Social media was saturated with photos, videos and testimonials.

Do you remember why?

The Ice Bucket Challenge was created to raise awareness about ALS, also known as Lou Gehrig’s disease. In several months, over $8 million dollars was raised to fight this horrible, terminal disease that has no treatment or cure. In other words, ALS is a death sentence – and along the way, the sufferer’s  body will slowly lose all ability to move.

I have a friend who has ALS; actually, I met her through my son. Her name is Cathy Speck, and over the last two years she has taught both of us about life and love while she is dying. You might remember her from the story I wrote last fall about the ALS walk we did together, or the Christmas caroling party she organized.

Everyone loves her-can’t you tell?

She really is an amazing woman – and I want her to stay alive. Watch this video clip and you’ll see why:

Nadine El Khoury created this video short about Cathy – and she is also the director of  ‘Better Days’, a documentary she has written, filmed, directed and is producing to share awareness about ALS.  Through a strange twist of fate, she found Cathy’s song, “Sweet Beyond”, online, not knowing Cathy suffered from ALS, too. Cathy and Nadine became fast friends, and a few weeks ago, my son and I attended a fundraising event to support Cathy and help raise awareness for the documentary project. There was no ice bucket, and we weren’t asked to do anything except listen to stories and watch a video trailer for a documentary trying to get finished.

I spent two hours shifting between tears of laughter, sadness and hope, but I left feeling full of love.

You can watch a trailer of the video here.

Nadine’s documentary has captured the essence of ALS: how it strikes at random, often swiftly and without warning, and leaves its victims living a life they never imagined.

So I have a favor to ask you.

Did you do the Ice Bucket Challenge? I promise you, my request is much, much easier.

We need your help. In our little town, at our little fundraiser, we gave over $4,400 towards helping get this documentary finished. This movie isn’t for profit- this is a project created by one young woman from Lebanon who had a friend develop ALS who is using her talents to spread the word about a disease. This is from one dying woman who lost her mother, two brothers and an aunt to ALS, and is living more gracefully than many. This is from one mother who has watched her teenage son befriend a woman who is dying, and has seen him enrich his life from knowing her.

This is from one writer asking you to be grateful for your health, and to share what you can to get this film finished. To find a cure for this disease.

To donate, use the “Go Fund Me” buttons on the documentary website, http://betterdaysfilm.com.

To watch another trailer for “Better Days”, click here: http://youtu.be/B5Cq_jMtHFs

An Ordinary 48 Hour Weekend-Is It Just Like Yours?
Illuminate: Finding My Way Gently Into 2021
Peace Begins At Home