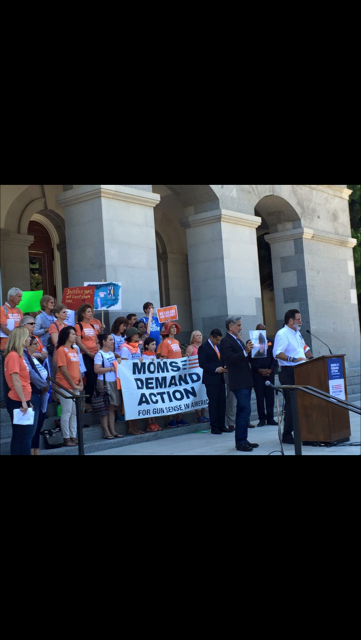 “Use wisdom, not weapons”, he pleaded to the crowd gathered in front of the California state Capitol building to end gun violence this morning. Not surprisingly, he elicited big cheers from his words – the crowd was comprised of moms, kids, and a few dads from Moms Demand Action and Everytown For Gun Safety, and we were there to gather support for California AB 1511, legislation that will close a loophole that allows guns to be loaned to people who haven’t passed a background check.

In my opinion, if Congress isn’t going to take action and vote for common sense gun laws, we need to take it local- go back to our towns, go back to our states, and focus our energy on getting states to pass the legislation to protect our children that the nation can’t seem to agree on.

I’m glad I live in California.

I spent the morning listening to legislators and volunteers and parents who believe in common sense gun control; people who are “survivors” of gun violence, who have lost family and friends to gun violence, or who like me and other moms, don’t want to watch one more moment of silence or prayer vigil after another innocent soul is shot down. We want to use wisdom, not weapons, to solve our problems. We want to see common sense used as part of the equation when talking about how to stop the killing in our country. We want to support the majority of Americans who believe in increased gun control and let Congress know we’re onto them, we see who is influencing them, and we will vote them out of office.

Small but mighty, we are. We are Moms Demanding Action-and just try to stop us.

To join us in our effort to end gun violence and enact common sense gun laws, follow Moms Demand Action and Everytown for Gun Safety on Facebook and Twitter. Join us in your community, or start a group of your own. Use wisdom to end the epidemic  of gun violence in our country. Use your voice to stand up for your children- and mine. Don’t wait until it happens in YOUR town to someone YOU love – remember, together we can do great things.