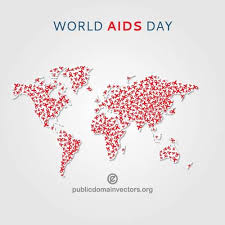 We are still fighting the battle with AIDS. It was the wake-up call to my generation, those in the 1980s and 1990s who first started dying – quickly, painfully, tragically – from AIDS.

Today our children know about this evil disease and have overcome so much of the stigma attached to living with – and dying from – AIDS. But still, far too many are suffering in 2019.

Today, according to the World Health Organization, “Of the 37.9 million people living with HIV at the end of 2018, 79% received testing, 62% received treatment, and 53% had achieved suppression of the HIV virus with reduced risk of infecting others.”

That is HUGE progress. But there’s still SO much to do. In our classrooms, we can start by talking and reading about stereotypes. Gender issues. Sexuality. We can bring a human face to AIDS – sharing biographies of people, both famous and just like us, who are living or have lived and died with AIDS.

Use this link for downloadable materials to help educate our children.

Why AIDS research is important to me

In 1991, I was student teaching and looking for a permanent job. I wanted to teach middle school, and met Steve – and I had no idea that this man, who recruited me to start a ‘technology grant’ school, had AIDS.  It was the early 1990s, and AIDS wasn’t mainstream.  It was a secret.  In education, no one was ‘out’, and certainly no one would reveal they were HIV infected.

Steve didn’t look sick or act like he was dying.   In fact, he never told us.   He just disappeared from work for one year.   We didn’t know what was wrong.  I wondered why he was not on campus; it was unusual for a man with his drive to teach to just not show up.

And one day when he came back to visit, we figured it out.   It took one look to see the lesions, the weight loss, the look of death.

And then he died.

Thank you, Steve, for taking a risk with me.  I was young, eager, and enthusiastic.  You gave me a chance.   I think you’d be proud of the teacher I’ve become.   I’ve never forgotten you, or your infectious laugh, or your love of the strange-but-contagiously-addictive middle school human.  I wish you were here.

Key facts about AIDS – according to WHO