“I know many people who started out on a “safe”, parent-approved track, only to leave it – voluntarily or involuntarily-after they’d spent a lot of time, effort, and money to pursue a course that had never attracted them…it’s painful to see your children risk failure or disappointment, or pursue activities that seem like a waste of time, effort and money. But we parents don’t really know what’s safe, or a waste of time.” – from Happier at Home by Gretchen Rubin

It started about nine months ago, the persistent questioning (sometimes to the point of nagging, in fact) that let us know he wanted a change. At first we hardly listened, brushing him off with a ‘we’ll see’ in hopes that it was just another spur of the moment idea. The persistence continued, growing more intense each day until we gave in to his request to ‘sit down and talk’ and we heard what he was saying: he wanted to move to a ski academy. 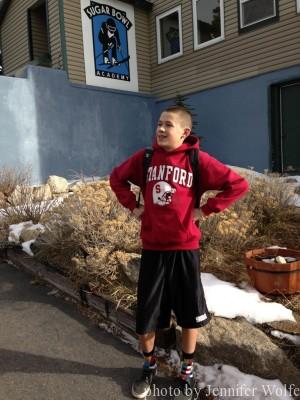 I don’t know why this surprised me, really. My kids have never really taken the ‘safe’ track for much in their lives; they push themselves with extreme, risky sports and always try to live life as an adventure. They love risk – so different from my childhood.

As parents, I think many times we make decisions based on what feels right and how the decision will effect our children – which sometimes is the right way to go. We check movie reviews, investigate song lyrics, evaluate safety ratings on our cars and determine our decision based on really concrete facts. But other times, I’ve found, we make decisions based simply on how it will effect us – will we be inconvenienced by getting up early for a practice, will we be bored waiting at the shopping mall, or will we just simply. miss. them. too. much. when. they’re. gone?

Some friends have called me brave for letting my son move away to pursue his dream. I’m sure some friends have called me crazy, irresponsible, or said “I-can’t-believe-she’s-letting-him-go-away-on-his-own.” Funny-I never considered it an act of bravery on my part – he’s the one who deserves the bravery award. My son is doing exactly what I raised him to do. He’s setting goals, believing in himself, evaluating risks, and taking action. He’s walking the talk. He’s just doing it 120 miles from home.

So when I dried my tears (the first time) and watched him walk into his dorm room on that first day, I realized that maybe this wasn’t a ‘safe’ decision for me, but it was safe for him. It’s his path to walk in life, not mine. It’s the ultimate in mother’s love. And while I’d be a lot happier to have him home every night, I know he’s on his own, parent approved track. And it’s fabulous.

This post was inspired by Happier at Home: Kiss More, Jump More, Abandon Self-Control, and My Other Experiments in Everyday Life

. Join From Left to Write on January 6 we discuss Happier at Home. You can also chat live with Gretchen Rubin on January 7 on Facebook! As a member, I received a copy of the book for review purposes.

Real Love In Real Life
What I Can Do Right Now: Spread Love
4 Easy Tips For Moms To Keep Organized