Still making news, the Occupy movement hasn’t fallen victim to a lack of media coverage.  According to the Sacramento Bee last week, “nearly three fifths of voters” agree with the cause.  I count myself as part of this cohort-I believe strongly in changing the inequities our country is creating.  I also find myself in the 99%.

But even though I am cheering on their message, I feel like the movement isn’t pushing forward in the best way possible to enact change.  Being the type-A-semi-control-freak teacher that I am, I’ve created a lesson plan for the Occupiers to follow.  Welcome to my classroom!

Rationale:  To win over people to the side of the 99%

Essential Question: How can the Occupy Movement share their message and persuade those people ‘on the fence’ to join the cause?

Activate Prior Knowledge:  Remember Martin Luther King Jr.?  He had a cause.  He created a national movement to promote his message using nonviolence.  If MLK had destroyed property or used violence to get his word out he would have only succeeded in pissing people off, not making them think.

Step 1:  Decide that it’s more productive to be peaceful.  If Occupy’s objective is to change people’s thinking, they need to win people over. According to the Sacramento Bee’s article on Nov. 29, “49% said they don’t identify much with Occupy protesters.”  The old saying, “You can catch more flies with honey than vinegar” comes to mind here-the people who need to be persuaded aren’t the types that think violent activism is ok.  The people who need to be persuaded are most likely 60 years of age or older, reasonably educated and have access to the media.  They also have money-they’re the 1%, right?  In the same article, “nearly one third of Republicans said they agree with the reason behind” the Occupy Movement.  These people otherwise might agree with the Occupy message, but don’t like seeing the destructiveness of the protesters.  This might not be the time for anarchists.  Power to the peaceful.

Step 2:  Focus the message.  One of the basic elements of persuasion is to have a strong thesis.  Maybe there needs to be a few key, clear outcomes identified that become slogans.  I know the basic idea behind the movement, but do you know how the success will be measured?  I don’t.  The homeless population, the pepper spraying, and the college protests have all diluted and divided what they want to say.  While all good symbols, the message is muddled.  Instead of fighting and protesting in the dark at the campsites, perhaps they could try to occupy when more people can see them in action.

Step 3:  Choose your enemies carefully.  Be cautious not to attack the 1% in total.  Some of those 1%ers may actually be interested in making change happen, too.  According to a field poll taken Nov. 14-27, 56% of those earning $100,000 or more agreed with the reason behind the Occupy movement.  Make sure there is room for everyone to join and feel like they fit in.  Name calling and stereotyping everyone in the 1% may just alienate people who would otherwise mobilize towards the cause. 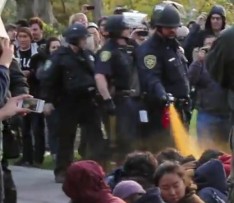 Closure:   Think about what the movement is all about.  Do protesters want to be right or make change?  Remember, no one wants to go out and be pushed, shoved, or pepper sprayed.  The media is looking for sensation, but is that going to strengthen the message and make things happen?  Power to the peaceful.  Focus.  Make friends not enemies.

Are there any questions?

Karate and Calling Up the Creative Spirit
My Best Life-Growth: August, 2013
Happiness Hacks For October 2017