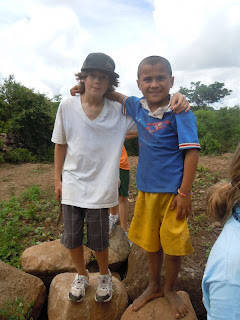 One of the hardest parts of our trip to Nicaragua was leaving the children behind.  Victor was a very special little boy who exemplified the happiness and heartbreaks we experienced during our stay:

“His dark brown head appeared from out of nowhere as the small pickup truck slowly lumbered up the rocky Nicaraguan road. Clad in bright yellow athletic shorts and a royal blue soccer jersey, he looked like many 9-year-old boys at my son’s Californian elementary school.

He shyly called “hola” as he hopped into the back of the truck. It was then I noticed his feet – bare, broad, and dirty. While he climbed aboard, I glanced at the muddy, rocky trail he had appeared out of and wondered where he had awakened that morning. ..”

Please follow this link to read the rest of the story about Victor and Nicaragua and how he stole our hearts.

9/11/20 and the Country Crumbles Around Us, Again
Goodbye, Dad
My Little Girl Got A Real Job