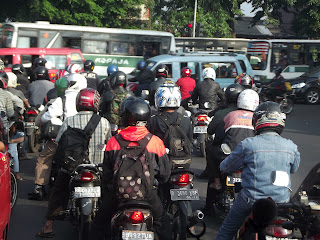 I’ve spent a little over 24 hours in Indonesia, and have been surprised during many of them.  So many of the people speak English, and as we’ve been driving around the city I’ve been amazed at the number of signs and billboards advertising American products and companies.
In the 8th grade classroom today I was surprised when the students stood and greeted us, clad int heir formal school uniforms (including black Converse) when we walked to the door.
I was equally shocked when they began the class with a prayer and then told me how much they like Facebook and Twitter.
And even though I’ve experienced California traffic, nothing can compare to what I’ve seen in Jakarta.  While we plan our commutes and trips according to peak traffic hours, in Jakarta there is always bumper to motorbike traffic.  Looking out my window now, at 10 p.m., I see tail and headlights in a steady stream.  Amazingly, the cars are in great condition and don’t look like they ever run into each other, and adults hold babies on their laps as they whiz by on their motorcycle.
I’m just soaking it all in, trying to understand the people, the customs and what is important to them.  And despite all the surprises of the last 24 hours, I’m starting to see that underneath it all we’re really all not that different.
For more on my Indonesian adventure, click over to travels with mamawolfe!

Kurt Vonnegut and Left of Center
Friday Photo: Words For My Daughter
Teaching Teenagers In Indonesia - They're Not So Different From American Teens