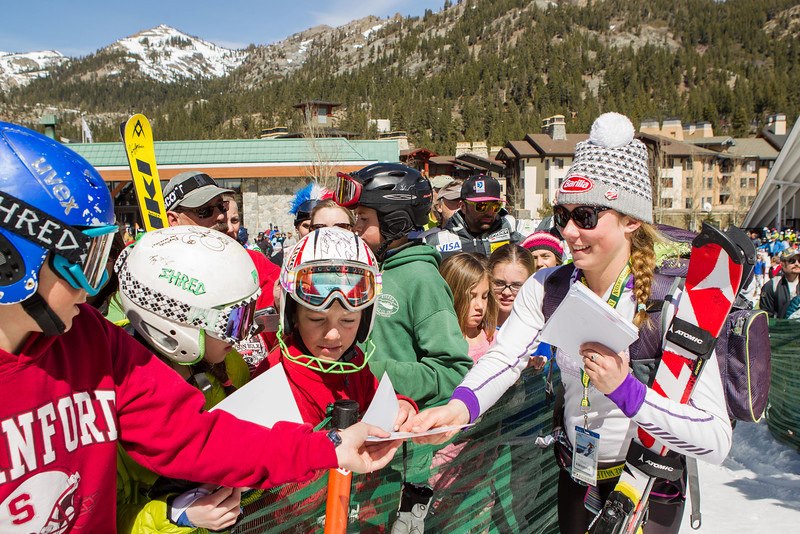 See that boy in the red sweatshirt? That’s my son. And the girl handing him the paper? That’s Mikaela Shiffrin, the World Cup champion slalom ski racer. She’s smiling, but she just lost a ski race. My son waited and watched her with careful concentration as she made her way down the ski course. She’s not hard to miss, really. We just had to follow the little girls, tv cameras and reporters that trailed her every move.

She was full of grace, really – on and off the slalom course. This year, 18-year-old Mikaela Shiffrin won the World Cup in slalom. That’s a huge accomplishment for anyone, let alone a teenager. She’s only five years older than my son.

As soon as she crossed the finish at the U.S. National Championship races at Squaw Valley last weekend, she skied into the open arms of her fans, mostly young kids. The budding races were eager to meet her, pose for a quick photo or have her autograph something-anything, really. Helmets, speed suits, arms, sweatshirts and scraps of paper were quickly scribbled on, and then Mikaela flashed a huge smile for  the best moment any young racer could hope for. She’s quite cool for 18. Barely bigger than they are, she’s small for a female ski racer-but mighty.

Ski racing is a sport against the clock. Hundredths of seconds can separate the winners from the losers. The sharper the ski edges, the wax on the skis, the split second decisions as the racers run down the course can change a first place run to last place. Intense pressure, to be sure. Mental and physical toughness are essential. Hours and hours of training result in one sixty-second run. And one guarantee: everyone falls. Including Mikaela.

In first place after the first run, she was poised to win. But that didn’t happen. In front of a crowd of thousands, she straddled a gate instead of skiing around it, and her race was over.

And still, she smiled. She skied into the finish area to once again sign autographs and pose with her fans. All the racers knew how she felt, the disappointment of going from first to last in one split second. All the race moms wanted to give her a hug.

“I think it’s most important that I just try to connect with the younger kids here. Most of them say they watch the World Cup races so I think they’ve seen the skiing and it’s probably cool to see it live. But I think the most important thing is that I get to have some time face-to-face with them and show them I’m not actually that different and that I’m a goofball. We can have conversations and they can get to this point,” she said.

She’s right. The fans didn’t care  that she didn’t finish. This crowd of kids-including my son-know that she’s a real racer. She’s just like them. She’s not perfect. She falls, gets up, and does it again. Over and over. She knows there’s another race, another victory, and likely another defeat, too.

He’s still watching her, carefully. It doesn’t matter that the scoreboard shows her in last place. We can all clearly see what a winner looks like.